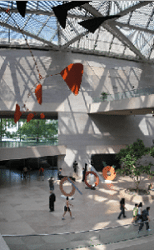 There’s plenty of events going on in Washington, DC this September. Find out about performances, festivals and exhibitions happening near your neighborhood.

The National Gallery of Art, near many condos in Chinatown, will feature the exhibition Yes, No, Maybe on September 1. It depicts the artistic process through printmaking, featuring the work of artists linked to Crown Point Press, which is considered one of the most influential printmaking studios.

The Air and Space Museum, close to Mather Studios, will feature Leonardo DaVinci’s Codex on the Flight of Birds starting September 23. This exhibition shows DaVinci’s fascination with birds and flight through his own drawings.

Portraits of Planet Ocean is coming to the Natural History Museum on September 17. View photographs from photojournalist Brian Skerry to see a unique perspective of oceanlife.

Residents of The Watergate are just minutes away from The Kennedy Center, which will feature Mirror and Music, the work of dance choreographer, Saburo Teshigawara, and KARAS. The performance explores the influential nature of music and our own self-image. It runs September 12-13 at the Eisenhower Theater.

Detroit is coming to the Woolly Mammoth Theater near Gallery Place on September 9. This dark comedy by Lisa D’Amour reveals the flaws within the suburban lifestyle.

Torch Song Trilogy is coming to the Studio Theater in Logan Circle. Written by Harvey Fierstein, Torch Song tells the story of a man trying to find acceptance and family within the gay community. It begins September 4.

DC Fest is happening on September 5 at the Half Street Fairgrounds, about five minutes from Landmark Lofts. Enjoy the cuisine of local food trucks, listen to live music, and play a game of corn hole. Tickets cost $20 for general admission.

The National Harbor will have the American Market available every Saturday throughout the month. Discover local foods, products, and arts and crafts.

Three Free Things To Do