Take a look at the upcoming events happening around Washington, DC this October. 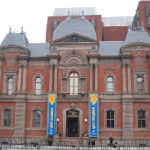 The Portrait Gallery, in the Georgetown area, will have the exhibit Dancing the Dream on October 4. View images of famous dancers and choreographers over the years, and discover how dance has evolved to represent our modern culture.

Infinite Place: The Ceramic Art of Wayne Higby will be featured in the Renwick Gallery on October 4.

The National Gallery of Art, close to many great condos in Chinatown, will feature the exhibit Heaven and Earth: Art of Byzantium from Greek Collections starting October 6. This is the gallery’s first exhibition to feature Byzantine art, which will showcase the life of Byzantine scholars, secular art and more.

Dave Mason, formerly of the band Traffic, will have a performance at The Wolf Trap Foundation for the Performing Arts on October 2 and October 3 at 8 p.m.

The Velocity DC Dance Festival is coming to the Sidney Harman Hall in the Shakespeare Theatre Company from October 10 to October 12. See the performances from a range of dance associations that include The Suzanne Farrell Ballet, Urban Artistry, Airborne DC!, Xuejang Feng and more. Tickets are $18.

The Kennedy Center near The Watergate will feature the 35th Young Concert Artists Series: Hermes Quartet on October 8 at 7:30 p.m. Hermes Quartet will perform music from Verdi, Schubert, Debussy and Dutilleux.

The Kennedy Center will also feature Opera Lafayette Presents: The French Cosi: “Mozart’s Cosi fan tutte.” The performance will be sung in French, but will have English subtitles. It’ll take place at the Terrace Theatre from October 18 to October 19.

Three Free Things To Do In October